Superstition holds that celebrity deaths come in threes, but the latest triple seems much stranger than most. Watching the coverage of the funerals of James Brown, Gerald Ford and Saddam Hussein showcases how completely different these three men were. Watching these pageants, I couldn’t help but think there was some Jungian connection between it all, but can’t quite flush it out. Instead, stray observations, in no particular order:

I have a confession to make: I don’t care about the JonBenet Ramsey case. I didn’t care when it happened, and I don’t care now. I will admit to being morally outraged about the “dress up five year olds like Texan whores” thing…ok, no I wasn’t. That part was a bit creepy, but I didn’t care much about that either.

I am therefore supremely qualified to make a prediction about the case. From the handful of three-second snippets I’ve heard on it, I predict the following:

You heard it here first. Or, hell, maybe someone else has already made this prediction. I wouldn’t know.

My career as a fortune-teller is not off to a very good start, since I’m making a prediction that will be completely unambiguous if it comes true or not. I should have put it in a quatrain about “one with a receding hairline” or something to be more cryptic.

Not that ambiguity would really matter, since people seem to fill in the blanks even when there are none. Take this comparison of a drawing a psychic made in 1998 predicting the appearance of JonBenet’s killer with the guy that confessed: 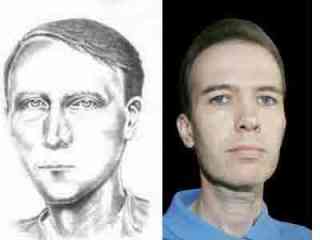 While upwards of 20 whole seconds of Googling couldn’t find a public version of this picture posted prior to three days ago, I’ll give the benefit of the doubt on that for now, since it is not particularly relevant to my point here. Which is: many people are freaking out over the similarity of the pictures. But…what similarity?

I’d like to believe in mental powers beyond those of mortals as much as anyone, but real evidence of this is…limited. Psychics continue to succeed because humans are experts at finding patterns where there are none and see things that are not there, like “similarity” in these pictures.

In one of my first posts, I suggested a viking-themed Las Vegas resort. Having just been back to sin city for the winter solstice, I’m even more enthusiastic about this idea, especially after a suggestion from my uncle (the same uncle that inspired one of my architecture papers over a decade ago).

Being told of my viking hotel idea, his immediate response was “it could host viking funerals.”

Vegas is already a wedding destination. I bet there are enough people that would pay to have their remains burned in a wooden barge on the resort’s artificial lake. The lake would have to be set up with a horizon, perhaps a falls into a bit that explodes into a massive inferno when the ship falls in (this is Vegas, after all). There would be a big feast of course; it would be an all-inclusive funeral package.

I think it would start a new “destination funeral” trend. First in Las Vegas (think of how much the Luxor could make doing pharaonic embalmings and entombments), then elsewhere (maybe zombie funerals in Haiti).